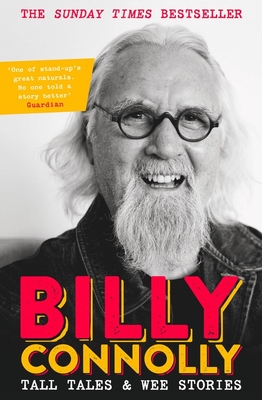 "Coming from Glasgow, it's weird, I don't really tell jokes, like Irish jokes and all that. I tell wee stories. And some of them don't even have punchlines. But you'll get used to it as the night goes on, and on, and on, and on and on..."
In December 2018, after 50-years of belly-laughs, energy, outrage and enjoyment, Billy Connolly announced his retirement from stand-up comedy. His has been an extraordinary career.

When he first started out in the late Sixties, Billy played the banjo in the folk clubs of Glasgow. Between songs, he would improvise a bit, telling anecdotes from the Clyde shipyard where he worked. Soon, the songs became shorter and the monologues longer, and Billy quickly became recognized as one of the most exciting comedians of his generation.

Billy's routines always felt spontaneous. He improvised, embellished and digressed as he went along. He brought a beautiful sense of the absurd to his shows as he riffed on holidays, alcohol, the crucifixion, or naked bungee jumping. But Billy's comedy could be laced with anger too. He hated pretentiousness and called out hypocrisy where ever he saw it. Billy had the popular touch. His comedy spanned generations and different social tribes in a way that few others have ever managed.

Tall Tales and Wee Stories brings together the very best of Billy's storytelling for the first time and features his most famous routines including, The Last Supper, Jojoba Shampoo, Incontinence Pants and Shouting at Wildebeest. With an introduction and original illustrations by Billy, it is an inspirational, energetic and riotously funny read, and a fitting celebration of one of the finest comedians.

Sir William Connolly, CBE is a much-loved Scottish comedian, musician, presenter and actor. He is the recipient of a BAFTA Lifetime Achievement Award and is regularly voted England's favorite stand-up comedian. As an actor, Connolly has appeared in such films as Indecent Proposal, Pocahontas, The Boondock Saints, and Brave. Billy was born and raised in Glasgow and now lives in Florida. He announced his retirement from live performance in December 2018.